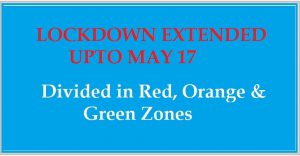 National lockdown due to CORONA VIRUS pandemic has been extended again upto May 17, 2020. But this time all districts of our country are divided in three categories Red, Orange and Green. Some relaxations are given in each zone.

We all must follow all the precautions recommended by medical experts to prevent spread of corona virus. #StayHome and  #StaySafe is new slogan to fight this epidemic. Keep Social Distancing. Washing hands very frequently with soap for 20 seconds minimum is must to keep corona virus away. We all must follow the lockdown rules to control spread of this deadly virus.

Hima Das is new world champion  in  Under 20  world 400m race  in  athletics championship held  at the IAAF World U-20 meet in Finland.  She is just 18 years old , athlete  hail from  Assam’s Nagaon district .

Her father is an ordinary Farmer. People in her village  called her “Dhing Express” in love .

Her coach Coach Nipon  and her Father praised her dedication in 100, 200, and 400 Meter athletics.

Congatulations Hima Das !!!!!!!  You will be new inspiration for the youth in Indian Sport world.

Nipah virus (NiV) infection is a newly emerging zoonosis that causes severe disease in both animals and humans. The natural host of the virus are fruit bats of the Pteropodidae Family, Pteropus genus.

NiV was first identified during an outbreak of disease that took place in Kampung Sungai Nipah, Malaysia in 1998. On this occasion, pigs were the intermediate hosts. However, in subsequent NiV outbreaks, there were no intermediate hosts. In Bangladesh in 2004, humans became infected with NiV as a result of consuming date palm sap that had been contaminated by infected fruit bats. Human-to-human transmission has also been documented, including in a hospital setting in India.

Kozhikode: Sixteen people have lost their lives to the Nipah virus in Kerala, with one more person succumbing to it on May 31.

Health department sources said 18 people have tested positive for the Nipah virus so far, of whom 16 have died. Two are undergoing treatment. According to the sources, the number of samples tested for Nipah virus is 196, of which 178 have tested negative.

The virus had claimed two lives on May 30.

In Kolkata, a 28-year-old soldier from Kerala, who was posted at Fort William, Kolkata, died of suspected Nipah virus last week. He was admitted to the command hospital on May 20, where he died five days later, a Defence spokesperson had said on May 31. His samples have been sent for testing at the National Institute of Virology at Pune and the results are awaited.

Over 1,300 people, who had come in contact with the affected persons before the confirmation of the virus, are under observation.

Three fruit-eating bats, their faecal and urine samples have been sent for testing at the National Institute of High Security Animal Diseases in Bhopal today, official sources said.

Earlier, samples of three insectivorous bats caught from an unused well of the Moosa family here, which lost three members to the Nipah virus, were sent to the Bhopal laboratory along with samples of pigs, goats and cattle in a 5 km radius of the affected area and all of them tested negative, the sources said.

The natural host of the virus is believed to be fruit bats of the Pteropodidae family, Pteropus genus.